A pretty good April for your defending World Series Champs, with a 14-8 record. One thing worth keeping in mind though: only one of the 22 games was played out of the division. The good part of this is that the Cardinals have a nice three game lead over the Reds, but that bad part is that the division looks like the worst in baseball. So, how good is this Cardinals team really? Even though the competition has been poor, I think this team is a pretty good one. Allen Craig and Chris Carpenter have yet to see the field and Lance Berkman is also on the DL. Despite this, the Cardinals have an astounding +53 run difference. In other words, they unlucky to be "only" 14-8. The starting pitching has been amazing. Wainwright had a rough first three starts, but looked good his last one against the Cubs. The other four guys have all pitched like aces, with Lance Lynn being the real revelation. Lynn has been so good in fact, that if he continues to pitch this way; someone else may have to move to the bullpen to make way when Carpenter comes back (though that seems a ways off yet). The offense has been almost as good as the rotation, with Freese playing like the postseason MVP he was last year and Beltran looking like a great offseason pick-up. It also can't be overstated what a dramatic upgrade Furcal is compared to Theriot from last season. Matt Carpenter has filled in admirably for Berkman. Second base continues to be the one problem area in an otherwise deep line-up. The only other major negatives are the injuries and the bullpen being a little inconsistent. I still have way more faith with the guys we have in the pen that I did at this time last year though. Salas in particular I expect to pitch much better the rest of the year. Going forward, Craig and Berkman should be back soon, so hopefully that will keep the team rolling. The next six games are against the Pirates and Astros, but the schedule is much tougher the rest of May. One final note: I REALLY like the way Mike Matheny has fit in as manager. No question, we would not have won the World Series without LaRussa last year, but his constant tinkering seemed to wear on the team during the regular season. Matheny is letting them play a little more, and that is a good thing for what appears to be a good team. Trey
Posted by Trey at 10:53 PM No comments: 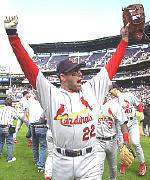 Retrosimba, a blog which focuses on the Cardinals' history, compared Beltran's hot start to my all-time favorite Cardinal (I don't care how short his tenure was)--Will Clark. Here's the link: Will Clark-Carlos Beltran What's even more interesting is that he posted that BEFORE Beltran's 4th dinger last night. May have another Berkman-esque free agent signing on our hands. Considering that Berkman equaled Pujols' WAR last year--that's a very exciting prospect.

Which brings me to my next tidbit: I noticed that the Cardinals total team WAR is currently (as of 4/18/12) 5.1. Ring any bells? Pujols' WAR for last season was also 5.1 I'm not sure there's anything to be gleaned from that. Thoughts? -CJ
Posted by Cardinal John at 1:30 PM 1 comment:

Guess Matheny missed the memo about how the Marlins were supposed to win in their new stadium. Actually, maybe he didn't. Thanks to the cornucopian outfield that is apart of the new stadium several would be homers were tracked down. Add in some horrible baserunning by John Jay, Lance Berkman, et.al. and I'd say we didn't play that great. There were several hits that were laced, but right at defenders. This could have easily been a loss. However, I'll be fair and say that we had some bad luck on well struck balls as well. In the end, I thoroughly enjoyed the first game of the season.

Although I love the idea of having everything on opening day, I do like having a nationally televised game the night before. It makes folks like me (who are in areas where viewing can be limited) grateful to have more baseball to watch. What I do not like, however, is some joke of a game halfway around the world, viewable by so few, and a week before everyone else starts. Selig keeps messing with things that are working perfectly fine.

Speaking of which, Selig was interviewed by the ESPN crew and one thing they talked about was the +1 for the wild card spot. Now look, I don't like watering things down (yes, I know the Cardinals won last year and got in on the wild card). And I especially don't like the thought of a team winning the wild card by multiple games only to slip up in a one game playoff because a butterfly flapped it wings in Beijing--who knows what problems could arise for games played in the closer Tokyo?! What was truly stunning, however, was not Selig's laughter at the comparison of County Stadium with the monstrous Marlins Park, nor was it the chuckle over how much he bought the Brewers for vs. how much the Dodgers sold for, but it was Selig's proud logic that the plus one makes winning the division mean more. He was literally beaming. That's right kiddies. Now it means....that you get to play immediately in the division series as opposed to....wait for it....getting to play immediately in the division series. Read it again. Yes, it's the same thing. It changes NOTHING for the division winner. Don't even try to say that they now get to play a possibly weaker opponent because (A) you still have to play against a team that won the silly almost meaningless play-in game and (B) if you claim the weaker opponent argument then you've just undermined the whole argument for why a play in game should even exist. Pip over at Fungoes must be going mental. Your commish, ladies and gentlemen!

Parting shots: Congrats to the Marlins, your new hideous lime-green stadium makes you the new Oregon Ducks. Perhaps you could invite the Seahawks to come play there as well?

Started revamping and updating the site here as well--will be redoing the blogroll, adding some widgets, and adding the UCB logo. Feedback is truly welcome--and encouraged. We can promise no flamingos, aquariums, showgirls, or lime green anything.