Baseball Fan by Birth, Cardinal Fan by the Grace of God 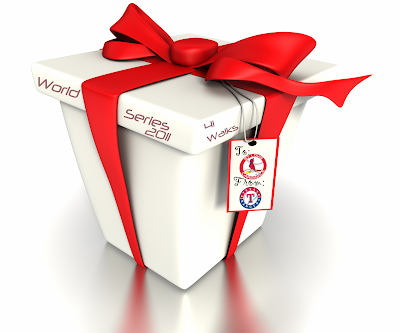 I'm exhausted. It's 4:30 AM here in Ireland. It was around 5:30 AM yesterday when game 6 finished. Yet, I'm more exhausted from the drama and excitement than from the time difference.
I believed the Cardinals were done 10.5 games back. I didn't think they had a chance against the Phillies' starters in a short series. I also believed the Cardinals were done in game 6. Being absolutely wrong never felt so good.
Personally, I believe that there are some accomplishments (e.g., winning 100 games in a season) which by technicality are greater feats than sneaking in as the wild card and winning the crap shoot that is the modern-day MLB postseason. However, when you consider what the Cardinals have had to face this year, loss of Waino, below avg Pujols, injuries to Pujols and Holliday, their season shouldn't be anything to scoff at. In the end, it's the title that matters and the ability to perform in that smaller sample size that is so so memorable.
In what may be (but I don't believe will be) Pujols' last season as a Cardinal, it's fitting to see the magic of game 3. It's also fitting that local kid, David Freese, traded for Jim Edmonds (our other game 6 walk-off hero), became the super-clutch-hero and WS MVP for his amazing and timely hits (although I feel that the full body of work should go to Napoli). It's also fitting that the series goes to the Cardinals based on the gutty game six performance. A performance, which, with all due respect to the 3 HR surge by Pujols, was the most amazing thing I've ever seen in the World Series. It's also fitting that Berkman would get his first ring with the Cardinals--an irony I find most satisfying.
The Cardinals did their best to give away the series. Botched hit-and-runs. Loads of fielding mistakes and errors. Blunders on the base paths. Phone-gate of game 5. Miserable at-bats with RiSP.
But the Rangers may have done even more to give it away. Loads of mistakes and errors or their own. Lots of LoB. But perhaps the most telling of all was the unreal amount of free-passes dealt out by the Rangers: 41 BB (a World Series record). One reason I felt so confident about the Cardinals coming into the WS was the lackluster Rangers' pitchers--looks like my confidence was well founded.
The Rangers are certainly a likable team with the inspirational Hamilton, ultimate nice guy Murphy, and the phenomenal bat of Young. Tip of the hat to the Rangers for a clean and classy series. But the Cardinals are filled with the same type of folks, Craig (long suffering in the minors) with his power, the bullpen oft-maligned, El Hombre, Big Puma, the list can go on.
I'm going to bed now. Doubt I'll sleep. Excellent.
-CJ
P.S. I love the beauty of Pujols' last at-bat. It was drowned out by the oncoming celebration. It's not that I'm not appreciative--exactly the opposite. But in this instance it was more about the team than about the man--as it should be.

Posted by Cardinal John at 9:34 PM No comments: 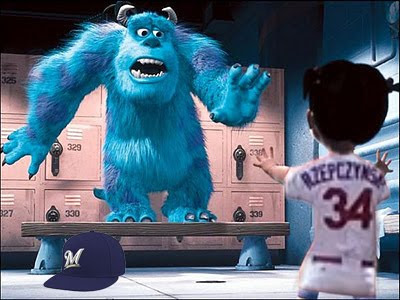 -CJ
Posted by Cardinal John at 5:15 AM No comments:

Watching the Brewers fielders is like nothing I've ever seen...cept maybe the 2006 Tigers in the World Series. The Tiger's errors (especially by Inge and Zumaya) laid out the welcome mat for a series that may have gone on much longer. Similarly, although the Cardinals are doing damage on their own part, they are certainly being helped along by Betancourt, Weeks, and Hairston (as I watch in game 5). Don't forget Estrada doing his best Zumaya pick-off impersonation. Furthermore, there have been many "non-errors" which should have been outs by Hart as his clumsily stumbles about right field. The limpy weeks let a soft hit ball behind second drop for what should have been a relatively easy out. Similarly, Nyjer Morgan too worried about how...soft...the center field padding was or too frozen to get a decent jump comically misplayed two balls that should/could have been outs. As beastly as the Brewers have been at the plate they have been anything but patrolling the diamond. In fact I would describe them as looking timid and bewildered--especially Hart who looks absolutely lost. Despite the Brewers' home record, when one combines the Cardinals hot bats, resurgent bullpen, starting pitching matchups, and Milwaukee's fielding I don't see the Cardinals NOT taking one over the next two. In fact, I don't see how Marcum stands a chance in game 6. We will see. Video of many of the gaffs here.
http://stlouis.cardinals.mlb.com/video/play.jsp?content_id=19903405
-CJ
P.S. On a different note I didn't like Pujols' last AB--it was oddly reminiscent of his game 1 hacks at balls out of the strike zone.
P.P.S. Chambers can fly.
Posted by Cardinal John at 9:09 PM No comments: 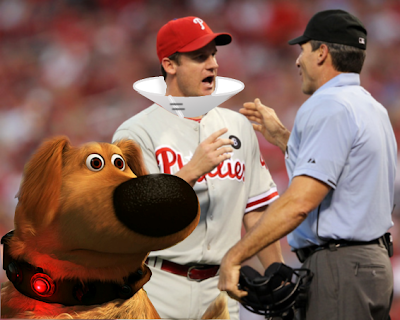 Posted by Cardinal John at 5:59 AM No comments: